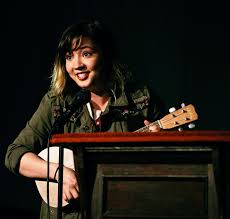 Olive Lynch is a comedian, actor, and foster parent to half a dog. She’s appeared on Vice’s FLOPHOUSE and in the CROM Comedy Festival, which are chill and tight (respectively). Olive loves drama, is exactly like other girls, and tries not to cry more than once a fiscal quarter. You can see Olive hosting the 1AM Secret Show in Atlanta or in Oakland Cemetery cursing the wicked.