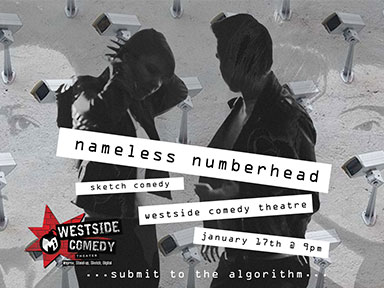 NAMELESS NUMBERHEAD is a sketch comedy duo from Charleston, SC with a post-apocalyptic vaudeville vibe. Running all lighting and sound elements from the stage, their show is a character driven satire about you and the weird routines and habits you exhibit everyday. Self identified as surveillance chic, Nameless Numberhead exposes our obsession with voyeurism of the mundane. It’s an absurd lesson on society you won’t want to miss. Unless you do want to miss it, in which case, that’s fine. Live your life. www.numberheadcomedy.com.

Maari Suorsa is an ensemble member with The New Colony (Chicago) and a graduate of The Annoyance Theatre program (Chicago). She has starred off-Broadway originating the role of Dale in the original cast of Five Lesbians Eating a Quiche.

Henry Riggs is an ensemble member of The New Colony (Chicago), Theatre 99 (Charleston), and a graduate of the iO Chicago program where he performed with 4 house teams. He received a Non-Equity Jeff Award (Chicago) for Original Music Composition for That Sordid Little Story.