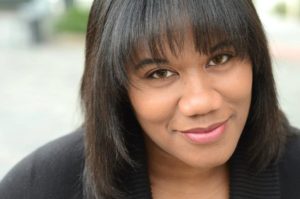 Valerie Henderson is an actress, writer and producer. She spent two and half years training at Playhouse West where she studied under Tony Savant, Chris Liebe, Wolfgang Bodison and Robyn Cohen learning the Meisner Technique. Following her time there she starred in several short films as well as a web series which she wrote, produced and starred in. As a member of the Westside Comedy Theater community she also studied improv for over a year. You can also catch her exploring her sassy sometimes sarcastic side on the Westside Comedy Theater Sketch team, GOLDIE. A resident of the Los Angeles area she is passionate about the art of telling stories, finding the truth in the characters she embodies and most of all having fun on stage!  When she’s not writing, producing or acting she’s DJing, and she has a serious passion for house music!
Valerie Henderson http://www.imdb.com/name/nm3747881/?ref_=fn_al_nm_5