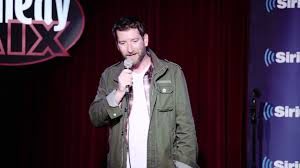 Born in Prince George, B.C., Matt Billon’s childhood dreams included becoming a police officer, a comedian or a wrestler. In the early years of his comedy career, Matt wrote material based on his experiences growing up in Penticton and Nelson and quite a bit from his family, making it somewhat awkward when he would do a show locally and his family would come out to watch.

Matt Billon honed his cool-headed, deadpan delivery on the stages of Yuk Yuk’s clubs across Canada. His solid reputation for his witty, creative and unassumingly clever material has landed him feature appearances and specials on CBC’s “Madly Off in all Directions”, Much Music’s “Video on Trial”, XM Satellite Radio’s “Laugh Attack”, and his own one hour, jam packed special on “The Comedy Network”. Matt has been a finalist/winner in “The Great Canadian Laugh Off”, “Stand Up & BITE Me” and the “Seattle International Comedy Competition”

Matt Billon has been the supporting act for Pauly Shore, Doug Stanhope, Harland Williams, Tommy Chong, Rob Schneider, Tom Green and has just finished his fourth successful tour with Canadian comedic comedy legend Mike McDonald. Matt signed on with Los Angeles agency Paradigm Talent after making waves at this year’s Just for Laughs Comedy Festival in Montreal, where he placed second in the popular Homegrown Talent Competition. His spot-on performance led to five other successful Just for Laughs shows, including Comedy Night in Canada and the ‘best of’ showcase, Talk of the Fest. The latter was attended by a slew of TV industry executives, who were impressed by his laid-back, soft-spoken style. He credits bouncing around from town to town after his parents divorced in forming that style.

For the last 12 years Matt Billon has been making a name or himself on the Canadian Comedy circuit. Whether it’s taking aim – with a pellet gun, no less – at insensitive siblings or bemoaning the fact he can never meet a girl who remembers her own phone number, Billon draws humour from his own life, no matter how embarrassing or incriminating.