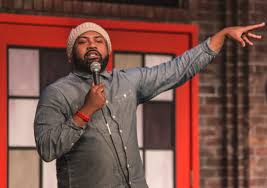 Dave Helem is a stand-up comedian and writer from Chicago, Illinois. He attributes his sense of humor to the fact that he believes there is something funny in every facet of human life. He has headlined numerous venues including the Chicago Improv, the Comedy Bar, and Rick Brunson’s House of Comedy in Canada. He performed on tour in numerous cities with Hannibal Buress and Tony Rock. He has also worked with Doug Stanhope and Tracy Morgan. He also performed on the 2015 Oddball Comedy Festival as well as the Big Sky Comedy Festival. Dave successfully completed a two month residency at the Woolly Mammoth Theater in Washington D.C. for Second City’s Black Side of the Moon, where he helped create and write the most successful selling show in the history of that theater. He also currently is a writer for Comedy Central’s Hood Adjacent (Summer 2017).