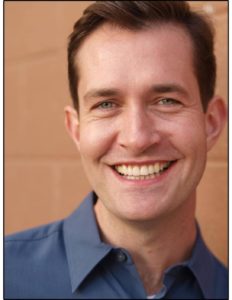 Ryan Timmreck took his first improv class on a lark at the newly opened Mi’s Westside Comedy Theater in 2009. Since then he has performed on house teams COBRANAUTS and SMOOTH PLUTO produced puppet improv darling NEVER BEEN FIST coached 2015 house team tournament champions AIR FORCE FUN and served on the theater’s advisory board. His filmmaking team swept Westside’s inaugural 48-hour film festival with their entry IT ALSO FOLLOWS and he currently performs in the IMPROV DIARY SHOW and THUNDERBULGE. Ryan grew up in Alaska, holds a bachelor degree in physics, and credits improv with opening his heart and keeping him creepily preserved for ever and ever. He is a producer/editor, filmmaker, and occasional actor & model. He has laughed in a Chevy commercial and been immortalized in oil as the enigmatic subject of artist Rikki Niehaus’ celebrated series “Swedish Landscapes.”