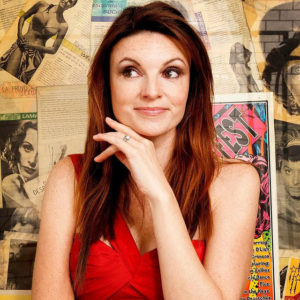 Jackie Monahan has been called “The Queen of deadpan” by Roger Ebert , “A F%cking Genius” by Roseanne Bar,  “Unstoppable” by Curve Magazine and “the funniest b$tch on the Block ” by Amy Schumer whom Jackie toured with for 6 years.. Jackie has since been headlining clubs and making guest appearances on TV and is beloved in the indie film scene. She performs at: The Comedy Store, Improv and alternative rooms. You may have seen seen her on Adult Swim’s “The Eric Andre Show”, Last Comic Standing, or Comedy Jam on Showtime. In addition, Jackie was just in theaters with Madeleine Olnek’s Wild Nights with Emily with Molly Shannon. Jackie starred in and co-wrote Madeleine Olnek’s beloved Sundance feature film “The Foxy Merkins” which was also nominated for an Independent Spirit award for best Director. Jackie was Zylar in Olnek’s Sundance hit “Codependent Lesbian Space Alien Seeks Same” which received rave reviews from both Variety and The Hollywood Reporter. She has been professionally trained at UCB and Groundlings but she was born with a spot on sense of timing and a unique look at life that cannot be duplicated. Jackie won Time Out New York Joke of the Year, was voted comic to watch by Esquire magazine who said “Jackie has the looks of your friends hot older sister with the jokes of a deranged serial killer. She will kill you and you will be smiling.” Jackie’s dynamic presence both on television and on the stage, brings an unapologetic fearlessness mixed with spontaneous combustion to every performance that will make you want to dance in the aisles. According to The Comedy Bible “Jackie wins over the crowd with her contagious energy. Jackie is fearless and patient. She keeps the energy up with every joke and she always delivers. She shines when being herself which is silly, relatable and absolutely disarming. She embraces universal humor that is genuinely entertaining to all audiences.” So do as the Brink says and “…jump at the opportunity to see this unstoppable comedian on the rise.”