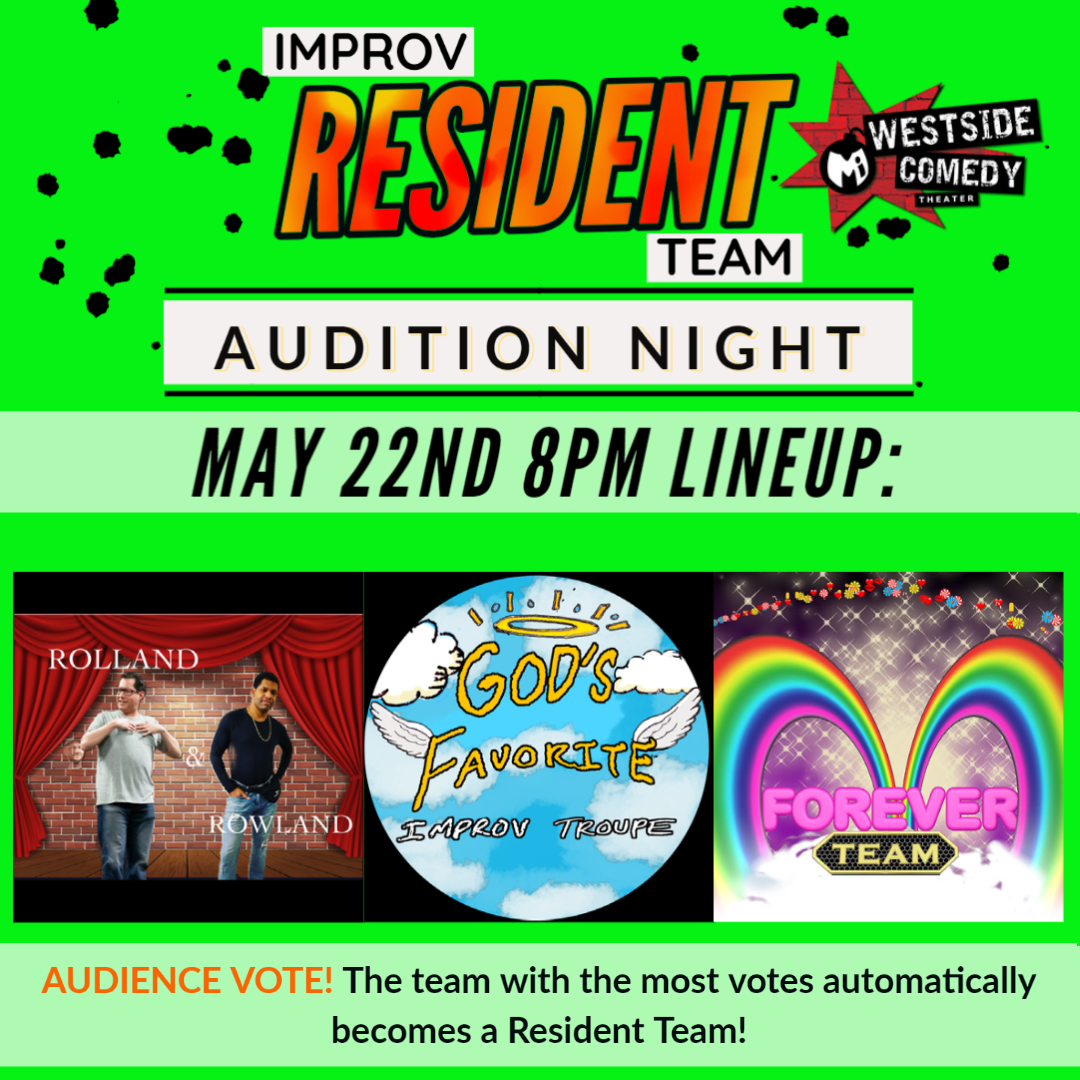 Rolland and Rowland met on the MI stage but it was fate that put them together one night for 25 minutes. Since then, they have been performing together where their loose style and fast-paced choices incorporating multiple relatable but silly characters make for a fun and an electric show!

God’s Favorite Improv Troupe is a longform group with a character-driven playstyle. Though we have only been a team for a little over a month, we have performed three times at the Pasadena Comedy as a part of the Bernie Mac and Cheese Variety Show, and we are looking to keep that momentum going. GFIT was formed through mutual friendships and an itch to get back on stage.

Luke Lutz studied and taught improv across the East Coast before moving to Los Angeles and studying at The Groundlings School and Theater. Through hosting open mics he was offered a spot to perform longform improv, but he didn’t have a team to take the stage with. First, he called upon his dear friend, roommate, and longtime improv partner, Brock St. Clair. Brock, always the gamer, said yes without hesitation. Next, Luke called upon a former Groundlings classmate and one of the most talented character creators he knows, Tori Foody. Tori jumped on the opportunity and three-fourths of God’s Favorite Improv Troupe was assembled. Finally, Luke reached out to a real double-threat, the very talented stand-up comic and improviser extraordinaire, Matt Mantel. With Matt’s inclusion God’s Favorite Improv Troupe was formed.

Forever Team is a long-form improv team that grew out of the training program at M.I.’s Westside Comedy Theater in Santa Monica California. The troupe features a diverse cast with Roberto Lewis, Alex Srour, Ruby Willmann, Jerry Witt, Carl Meyer-Curtis, and Christina Lopez. They are currently coached by Chris Alvarado and were previously coached by Amanda Blake Davis.

Besides being featured as an alley team, a house team and, most recently, a resident team at the Westside Comedy Theater, Forever Team has appeared on numerous stages in the L.A.-area: UCB, Pack Theater, The Improv Space, The Fanatic Salon, The Clubhouse, and Acme Comedy Theater. They performed at the Wasatch Improv Festival in Utah and co-hosted a bi-weekly improv show called The Rocket Science Improv Show in Westwood.

The team has performed together for four years. They are known for presenting emotionally honest characters in both realistic and fantastic situations.